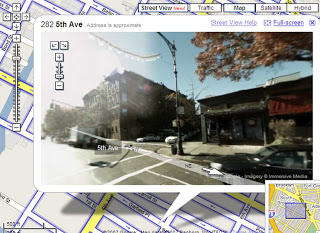 Scott just discovered the new “Street View” on Google Maps. With Street View you can actually view 360 degree images of the street and buildings at the given address and then start a virtual walk through the neighborhood.

Apparently they drove around the streets of several cities with a 360 camera.

So far they’ve only done a few cities – including parts of New York. Here’s a view of an old time favorite Great Lakes bar in Park Slope, Brooklyn.

Or type in an address on google maps in New York, Denver, San Francisco, etc. and then click on Street View.