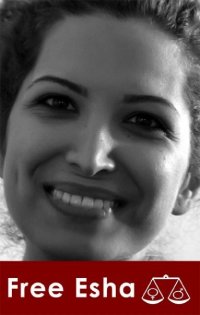 Today a friend forwarded to me his friend Anayansi Prado’s email about the arrest of fellow filmmaker and Cal State student Esha Momeni on October 15th in Iran. Of course, I find it appalling when a documentarian or any journalists or any artists, for that matter, are arrested for their work. I was raised to believe that art (including documentaries and journalism) is defined by its capturing and commenting on the status quo of culture, politics and human dealings, etc. To have a healthy society (and this goes beyond national borders) it is important for artists to capture what they see and be able to comment through their work.

To some it may seem that the issue in this case may be complicated by the fact that Esha Momeni wasn’t just conducting video interviews with members of the One Million Signatures Campaign, but that she was also volunteering for the organization.

The Campaign, “One Million Signatures Demanding Changes to Discriminatory Laws,” which aims to collect one million signatures to demand changes to discriminatory laws against women, is a follow-up effort to the peaceful protest of the same aim, which took place on June 12, 2006 in Haft-e Tir Square in Tehran. (from their website)

It’s possible that her direct involvement with the organization may be at the root of her arrest more so than her activities as a filmmaker. But in my opinion, arresting someone for (peacefully) pursuing women’s rights is just as wrong.

It’s a tricky thing to make judgments on other cultures. For example, I’ve heard convincing arguments by women for wearing a veil when in public – while I had always considered it as something that is degrading to women and restricting their freedom. It’s not up to me to say what is right or wrong for others – especially if they are raised in such a different culture – but I DO believe it is important that people have the freedom to choose and that there are equal rights for all – no matter what gender, race, creed, sexual orientation, etc.

But again, a priority is that journalists and artists of all manners are free to witness and share what they have seen so we know when its time to take action and protect those who need help.

I deeply admire Esha Momeni for her courage and persistence and hope she will be free soon and not suffer any more harm.

THIS MIGHT BE LONG, BUT PLEASE READ ALL THE WAY — IT’S IMPORTANT!!

Today I was informed of some heartbreaking and sad news.

A young Iranian woman I’ve been mentoring and working with here in the US has been detained by Iranian authorities — and I need your help.

Esha Momeni, a documentary filmmaker, activist, Cal State Northridge student and friend was arrested October 15th in an unusual and illegal manner after being pulled over on Moddaress highway, by individuals who identified themselves as undercover traffic police on the pretense that she had unlawfully passed another vehicle while driving. Esha was arrested and taken to Section209 of notorious Evin Prison, managed by the Intelligence and Security Ministry.

Esha, who was born in Iran and holds US citizenship, had been in Iran for the last two months visiting her family and working on her documentary/Masters thesis project, focused on the Iranian women’s movement. She had conducted video interviews with members of the One Million Signatures Campaign in Tehran. Since April 2008, I’ve been working with Esha in shaping her vision of showing a different side of Iranian women. Esha wanted the world to know that women in Iran were standing up for change and that they were empowering each other — and that’s what she set out to capture in her documentary project.

Esha’s family was hesitant in announcing news of her arrest immediately after security forces promised the family that she would be released quickly if news of her arrest was not published. This never happened and so we are going public now.

Esha is currently being held in solitary confinement. Iranian authorities are refusing to give any information regarding her case, investigation or when she might be released. Not even her family is allowed to speak to her.

I am reaching out to my network of people with hopes on getting support and spreading the word about Esha’s arrest and doing something about it!

As many of you know, who are also in this field, being a documentary filmmaker is a call of passion. As documentary filmmakers, we have to overcome many challenges in various levels, especially if we strongly believe in sharing with the world our vision. Most of us we will go to any length — even if it means risking our lives — to tell a story that moves us hearts.

Esha is a strong and courageous young woman who took a chance and risked her own safety for the opportunity to share with the world the situation of her Iranian sisters and their struggle for equality.

She deserves our support.

How can you help?

We need support from human rights and artist organizations, as well as media contacts.

If you are affiliated with a human rights organization or a filmmakers and/or journalists association, we need your support.

We are looking for groups and organizations who can publicly show their support in requesting Esha’s release. They can do so by posting information about her situation on their sites or/and by writing a letter of support. We are also looking for media coverage, especially on alternative media channels.

If you think you can help, please reply to this email and we will give you more info.

And last, please spread the word.

We must let people know of Esha’s situation as it is a violation of women’s rights, human rights and a disrespect to the artistic and professional work of documentary filmmakers, journalists and activists.

Also, check out the blog http://for-esha.blogspot.com

Thanks in advance,
Anayansi

PS: Please keep Esha & her family in your thoughts and prayers. Thank you.