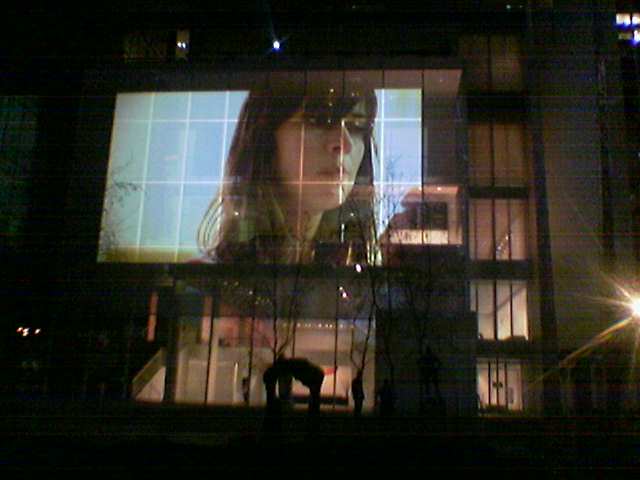 Last night we managed to make it to MOMA just in time for the last two cycles of Doug Aitken’s “sleepwalker” – a video installation on the outside walls of the Manhattan museum. It was my last chance to see it since it only runs through the end of this week and I will be out of town. So despite the 16 degree weather we made the trek up to the museum knowing we’d only be able to see maybe 15 minutes of it before the films stop screening at 10pm.

Yes, and even though it was freeeeezing and we had to stand outside while fancy people all dressed in black were eating even fancier dinners inside the museum it was so worth it.

In-between are screens of visuals. Everything happens perfectly in sync and is mesmerizingly beautiful. The films on their own may be visually poetic, but it’s in connection with each other and on this large canvas (that feels like the city itself) that makes hese films have such an impact.

The only issue I have: why in the world would you screen these in February? To attract tourists during the off-season? It was kind of fun to be the only people watching last night in the sculpture garden (besides the employees who have to) – but I’d rather have not been freezing my toes off.

Still, even at 16 degrees I can only recommend to go. Each cycle is pretty short and then all films get played again on different screens, so it’s worth just going for 15 minutes at a time. One Reply to “Doug Aitken: sleepwalker”