Today there is an article by Gabrielle Felconeiri in the Gainesville Sun about All God’s Children and its screening tonight at The Story House. This article is the most meaningful to me so far.

Gainesville is my home away from home. It’s where I found my voice and means of expressing it by making my first videos. It’s where I met some of my dearest friends, my husband and the confidence to “just do it”, instead of getting too hung up on details, logistics, expectations and self-doubt. Inspirational DIY at its best! 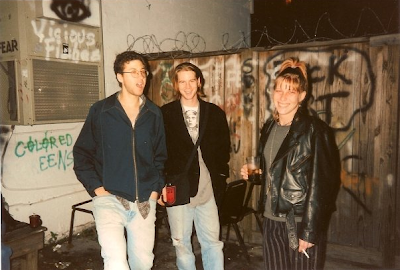 Shermy D, Scott and Megan
December 1994 at the Hardback Café
going away party before I moved back to Hamburg
(photo by Rachel?)

So it’s amazing to have an article in the local paper about a film Scott and I made together and announcing its local premiere. It’s a bit of a full circle or a kind of homecoming. Except that I’m actually not there for the screening tonight, which is very frustrating. I’m sad to miss the opportunity to spend time and share this film with the people who always seemed to believe in me and support any random project or idea and who have been an inspiration to me for the last 17 years. 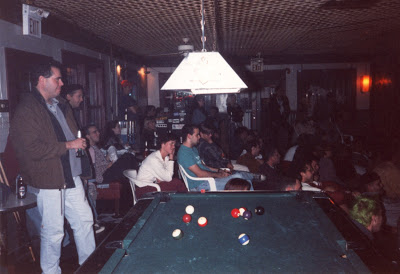 How amazing and supportive the Gainesville scene is, got proven again by Wendy Michel of The Story House asking (as soon as she found out about the film) if she could show it at her cool art space and now organizing the entire event; and then Dave, Celino and Danarchy volunteering to hand out post cards and everyone spreading the word. You guys are the best! 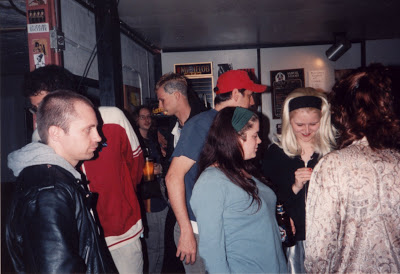 Jeff, Shermy D (hiding), David, Danarchy (tattooed skull), Rob Dark (my first ride to Gainesville), Kristen (my first friend in G’vle), me, Margaret (interviewing in Just Because and interviewed in All’s Well and Fair)
Screening of Just Because
Hardback Cafe, 1994


When in 2006 I got worn out and frustrated with the whole “film thing” in the process of making All God’s Children, I went to Gainesville for a few weeks to get back to the roots and just shoot something again for the joy of it (instead of all the other aspirations and hang-ups that drive a lot of work). The result were All’s Well and Fair and a burst of inspiration, energy and reaffirmation of my desire to “just make films” no matter what anyone else “says”, which in turn played a part in me sticking with All God’s Children until it finally was done and could be shown.

So now instead of being in Gainesville this week, I’m working on finishing up All’s Well and Fair, which is set there and which I hope to show there very soon. 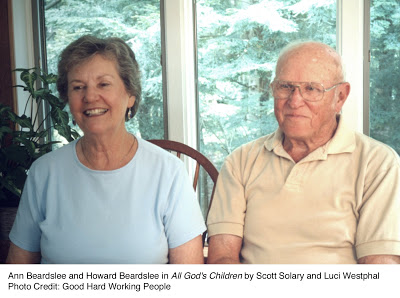 Last but not least while I’m selfishly sad that I can’t be there, the film will be well represented (and discussed after the screening) by producer/director Scott Solary and by film participants Dr. Howard and Ann Beardslee.

On a little, yet to me meaningful, side note: Apparently in the print edition of the Gainesville Sun the article starts (together with a photo from the film featuring Ann and Howard) on the front page of the Film & Music section. Also on the front page is a picture of my dear friend Christia (from Tallahassee) and her band Girls On Film, who are in Gainesville tonight to play a show at The Atlantic. We’ve been friends since long before her band and this film – so it’s quite cool to see that both of us have our work shown in the same town (where neither of us live) on the same night and also mentioned on the same page of a newspaper. A great piece of memorbilia.

READ THE ARTICLE ABOUT ALL GOD’S CHILDREN HERE