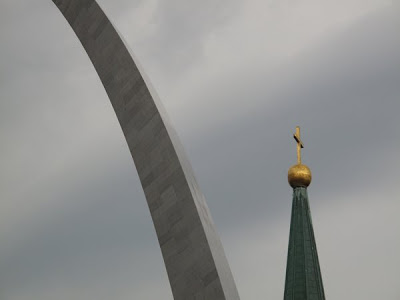 The St. Louis Arch and the near-by Catholic Church – in a sense this sums up our trip to Missouri (just add bunnies, brewery and brothers)

Scott and I traveled to Missouri for three days this week to attend a screening of All God’s Children in St. Louis and to meet some of the wonderful people of SNAP (Survivors Network of those Abused by Priests), who helped the Mamou Steering Committee back in the day, are supporting us in our outreach today and who set up the screening in St. Louis.

We had such an outstanding time in Missouri, which also included sight seeing in the city, relaxing in the country, meeting wonderful new people and finally getting to see Rich Darr again and spending more time with David Darr as well.

On Monday, after we flew into St. Louis on that horrifying “bus with wings” (with 42 seats the Canadair Regional Jet has 7 seats LESS than a Greyhound bus), we soothed our nerves with sweet sodas and diner food in University City’s Loop at Fitz’s Soda Bar and Grill, known since 1947 for its, you guessed it, sweet sodas.

We drove for a little over an hour through the country side to the Heaven on Earth Bed & Breakfast (two charming cabins in the woods), where the generous proprietors Judy Jones and Steven Spanner were hosting us and the Darr brothers. And not only that! Energy-bundle Judy Jones also is the person who set up the screening in St. Louis. She certainly deserves our first big THANK YOU! 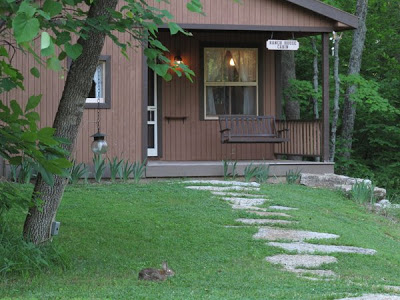 Upon arrival there is a wild bunny sitting in front of our cabin (we chose “Ranch House Cabin” vs. “Cowboy Cabin”) – it’s almost too much cuteness
(photo by Scott)

For sunset on Monday, and again for a morning run on Tuesday, we drove to Washington, MO. On the way we passed several wineries, which we never got to sample, Daniel Boone’s house, which we never got to be awed by and crossed the Missouri on a way-too-skinny bridge for such a large river. Part of our trip took us on Route 66 and on the Lewis and Clark Trail. Americana, hello! 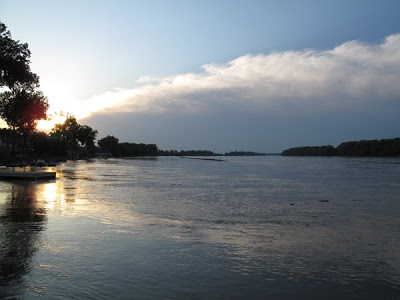 Tuesday we took off for St. Louis to get our tourist on before the screening in the evening. We totally did the Gateway Arch – in-between torrential thunderstorms. Here are way too many pictures of the arch (anytime you ask, I’ll be happy to post another dozen or so): 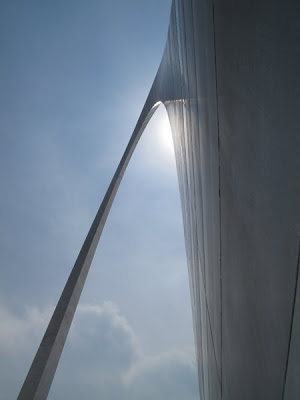 The rain clouds are coming back 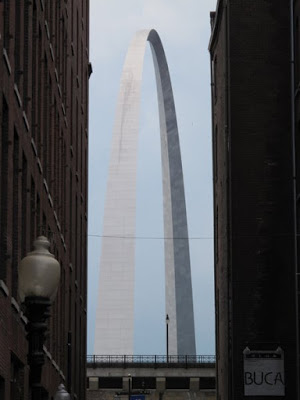 The sky is about to open up – time to find the nearest Imo’s for some unique St. Louis pizza (which is just like the one we bake at home in Germany)

And then it was time to head over to Schlafly Bottleworks, who so generously offered one of their event spaces. We “retaliated” by having a pre-screening dinner with almost 30 people all at the same table. Just like so many of our friends from all over the country had before (when we were planning the trip), we can now highly recommend the food and, of course, Schlafly’s beer. 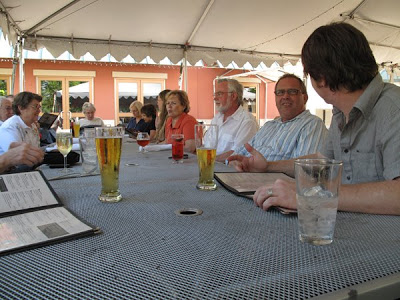 The screening turned out to be a true milestone on our screening tour: we had an almost full house of survivors, survivors’ families and other supporters. There was a reporter, a sign language translator and even a bartender serving drinks all night. 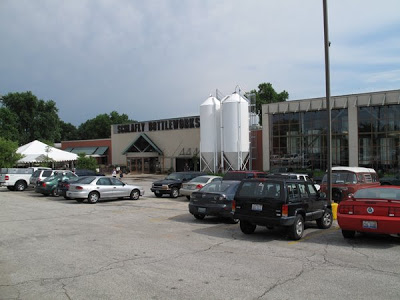 SNAP National Director David Clohessy, who had been so instrumental in helping the MKs over a decade ago when they first publicly pursued the CMA for reconciliation, moderated the screening and the Q&A with Rich & David Darr and Scott & me. He set a different tone from the beginning by asking in turn for different groups to stand up: SNAP, VOTF (Voice of the Faithful), survivors, survivor’s families. By “outing” people, it actually created a much more comfortable and safe atmosphere. Everyone here understood.

And this may have led to another special experience: As soon as the film was over we received a standing ovation. In our usual experience people are not in an applauding mood right as the credits roll (they wait until the Q&A). It took us a screening or two to convince ourselves that it wasn’t because they thought the film was terrible – but because the film leaves most people sad or even shocked. But this was a different audience; these were abuse survivors and their families. They didn’t seem shocked or saddened as much as vindicated and understood. Wow, what an amazing feeling to stand in front of a room full of people who truly could relate and who could appreciated the work that had been done by the MKs, their families in their advocacy work and in making the film. 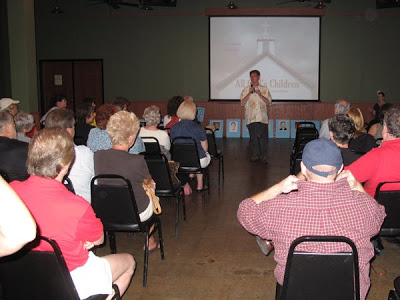 David Clohessy introduces the film and the audience. The pictures behind him are of 14 clergy abuse victims, 2 of which have committed suicide, 1 of which was in the audience!

An interesting aspect was that the majority of people affected by similar abuses in the room came from a Catholic background. It probably was significant for all to see the connection that reaches beyond the denominations. Furthermore there seemed to be inspiration going back and forth between individuals and groups. We certainly felt very motivated and inspired by the other people’s activism, stories and reactions to keep showing this film and to keep working on the next one. There is no greater reward than engaging with an audience, which inspires.

Thank you to everyone who came out, listened, asked questions and shared.

Our biggest thank you still goes to the amazing David Clohessy, who has played such an important part in the journey of the Mamou MKs and now in our outreach with the film. He’s a true maven with endless knowledge, suggestions, support, the energy of many men and maybe most importantly such sincere compassion. All this packaged in a personality that makes you think instantly that you’ve been friends with this person for decades. I am so glad we finally got to meet and feel very lucky to have him on our side. 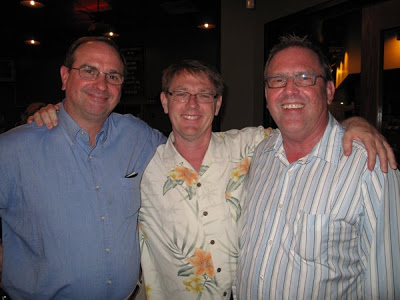 A very special thank you goes to the warm-hearted PR expert Linda Briggs-Harty for promoting the screening to the media. Thank you to Mary Ellen Kruger for selling the DVDs. Thank you also to Teresa Clark for translating the film into sign language. Last but not least, a big thank you to Schlafly for having the screening and to Nathaniel, the charming bartender, for creating such a relaxed atmosphere. It can’t be denied what a thrill it was to have a screening in a room with a bar at the back, where people could order a stiff drink in the middle of the screening. I like to believe it made the film easier to digest for some. 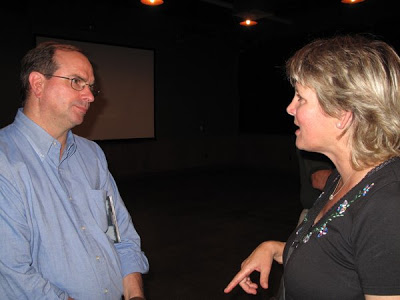 Rich Darr and Linda Briggs-Harty after the screening

And of course, thank you to Rich Darr and David Darr for traveling all the way to Missouri to share their story and be an inspiration to others. It took a lot to tell the story in the first place and I don’t ever want to forget how intense it is for all of the MKs and the parents to sit through a public screening and show their vulnerability and share the horrors of their lives. They are such brave souls and in their name I would once more like to show my gratitude for all the audience members who have thanked them for their courage and tenacity. 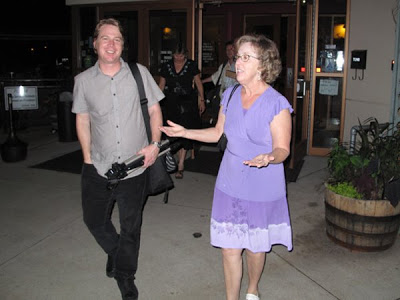 After saying good-bye to all the wonderful people we met, we drove through the night back to the B&B – luckily not hitting the raccoons and the skunk that crossed my path. Scott and I closed out the night on a fun note chatting with Rich, David and Stephen in the Cowboy Cabin.

Before we traveled back to our various states (Illinois, Ohio and New York) we all agreed over breakfast: Missouri was a wonderful experience and we’re ready for more.

Our next screening (attended by Scott, me and Dianne Darr Couts – and organized by Mamou alumni Shary Kroeker Hauber) will take place:

Please be in touch with me if you’d like to see the film screen in your town: you might be able to organize your own screening – or suggest a venue.

And please join us on facebook for the latest up-to-date news about the film and a place for you to add your own review or to participate in a discussion.

One Reply to “Milestone Screening in Missouri”