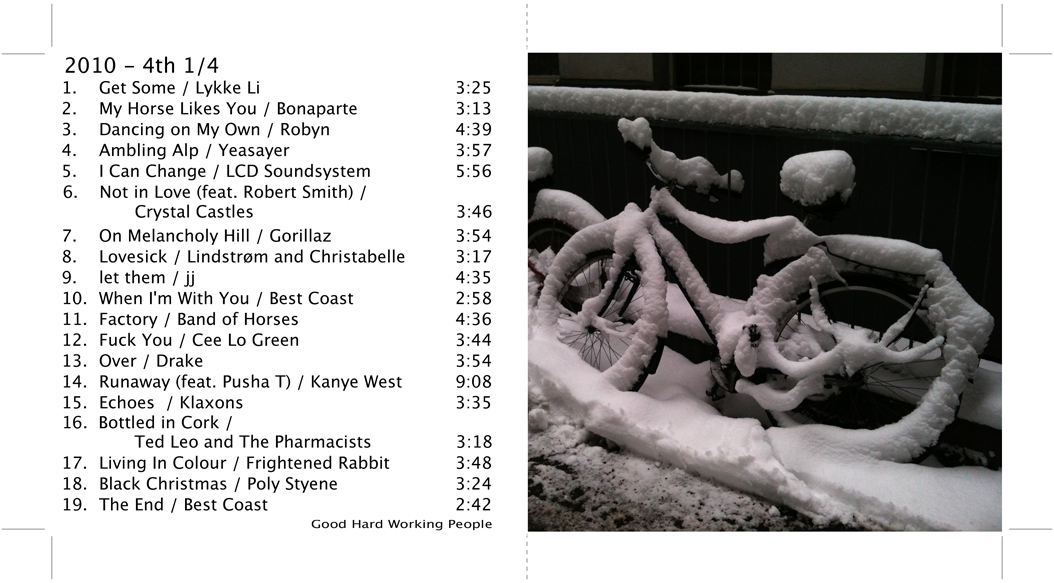 As usual there were more favorites than would fit on one CD. And yet I still wonder about songs that I included, like the Kanye West song – not just because of the somewhat questionable text, but because of the long intro and outro, which I actually don’t love so much. Other songs are from much earlier in the year, but somehow still found their way on this mix.
All song links below point to official music video when available.
Get Some – Lykke Li
Free legal download
My Horse Likes You – Bonaparte
Dancing on My Own – Robyn
Ambling Alp – Yeasayer
I Can Change – LCD Soundsystem
Not In Love (feat. Robert Smith) – Crystal Castles
On Melancholy Hill – Gorillaz
(must-watch video)
Lovesick – Lindstrøm and Christabelle
let them – jj
(new official video)
free legal download
When I’m With You – Best Coast
Factory    Band of Horses
(live on Later with Jools Holland)
F**k You – Cee Lo Green
Over – Drake
Runaway (feat. Pusha T) – Kanye West
Echoes – Klaxons
Bottled in Cork – Ted Leo and the Pharmacists
Living In Colour – Frightened Rabbit
Black Christmas – Poly Styrene
free legal download
The End – Best Coast