Skip to content
Tweet
Share
Share
Pin
Share
0 Shares
And I wasn’t going to write about The National again (and again). I swear, I wasn’t – especially not after already tweeting about their show so much the last two days. But as I’m working on other writing today and listening to their new album High Violet*, which was already released in Germany (ahead of the US release tomorrow), I just can’t help myself. Because even though I wasn’t blown away at first when I listened to it streaming on the NYT and NPR websites in April, after hearing it a few more times during train travel yesterday and then now, I’ve totally fallen for it. I love the intricate arrangements, the choice and clarity of instrumentation, Matt Berninger’s voice, which ads emotion, and lyrics that let your mind drift.
By now I like so many songs on the album, I can’t even pick a favorite.
My recommendation: check out the entire streaming album on the NPR website.
For a quick glimpse, here is a live studio recording of “Runaway” from Canada’s Q TV…
… and a live concert performance of “Afraid of Everyone” posted by The Milk Carton (with the typically underwhelming live sound and picture quality but giving a sense of the concert atmosphere and another great new song):
Also, I highly recommend going to see them play live (Although it’s been obnoxiously difficult to get tickets – with Brooklyn shows selling out within minutes. Or where they ever really on sale?). No matter if in a fancy theater with strings and horns or a small rock club with just the basic instrumentation, it’s always a powerful experience and much more lively than you might expect from the even recordings – that’s partially (but not only) due to Matt Berninger’s antics… at Huxley’s Neue Welt he walked along the railing and sang “Mr. November” (I think) – holding on to stunned audience members and in danger of falling on us and breaking the important microphone hand. 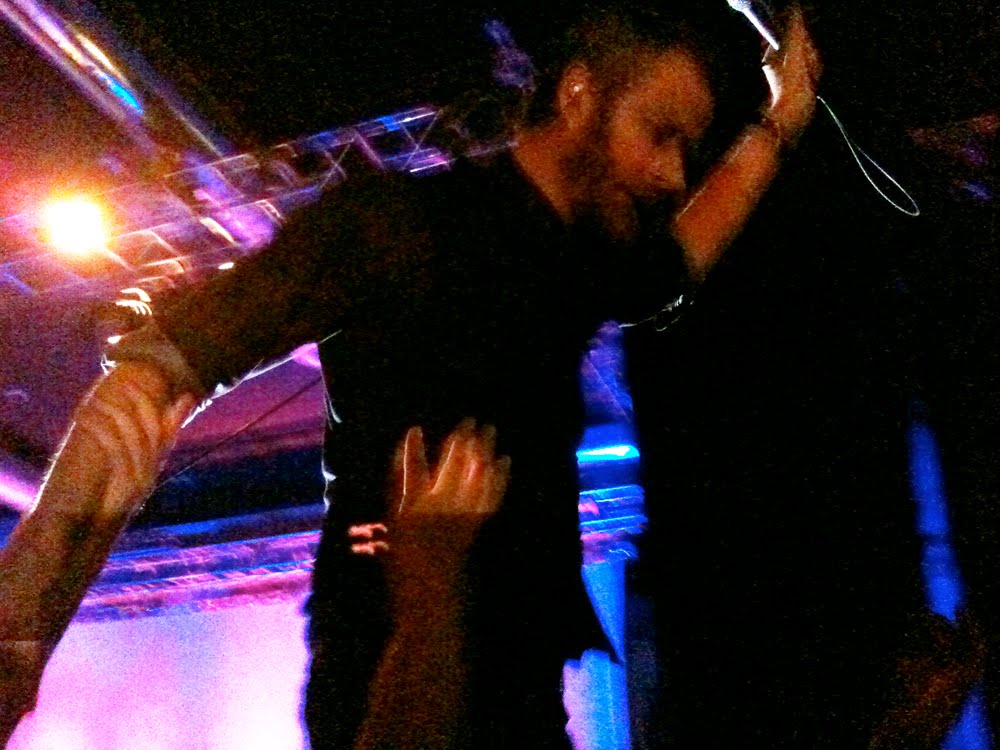 Matt Berninger of The National at Huxley’s Neue Welt on May 8th
By the way, I was disappointed that they didn’t play “So Far Around The Bend” from the Dark Was the Night compilation. It’s one of my very favorites. Especially now that I have left New York and I’ll be seeing Pavement next week 😉
—
Visit the website for High Violet, featuring a free download of “Bloodbuzz Ohio” and pictures and short video clips from the recording studio.