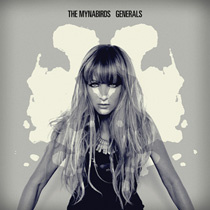 So far I haven’t been able to find a video for this fantastic song “Generals” by Omaha band The Mynabirds. And I have some rules about waiting until there is a video for a song, after all, I’m a filmmaker, not a music critic.
But I just can’t wait. And there’s a very promising album trailer for the album Generals I can post, which gives you a glimpse of what might be an upcoming music video. Of course, the band being from Omaha the album Generals is on Saddle Creek Records.
“Generals” fits so perfectly with my documentary series All’s Well and Fair, which is pretty much all I can think about right now. The song is a great motivation for me right now as I keep pushing the series and hope for people to get engaged.
Download “Generals” from Spinner HERE.

‘Generals’ is a modern protest song. It’s meant to remind us that
despite what we’re up against (a whole system that invests billions of
dollars in destruction and war while our health and education fall
apart), we’ve got the power to turn it around. It’s meant to get people
up on their feet. It’s the new ‘whistle while you work’ — it’s ‘dance
while you’re gettin’ it done.'” — Singer Laura Burhenn

Also very inspiring is the photo series initiated by the Mynabirds singer Laura Burhenn entitled “The New Revolutionists”. Beautiful black and white photographs of strong, inspiring women. From Huffington Post: Laura Burhenn’s new collection “The New Revolutionists”
takes inspiration from Native American soldier portraits, portraying
women not as breakable objects but imbued with strength and beauty from
the inside out.