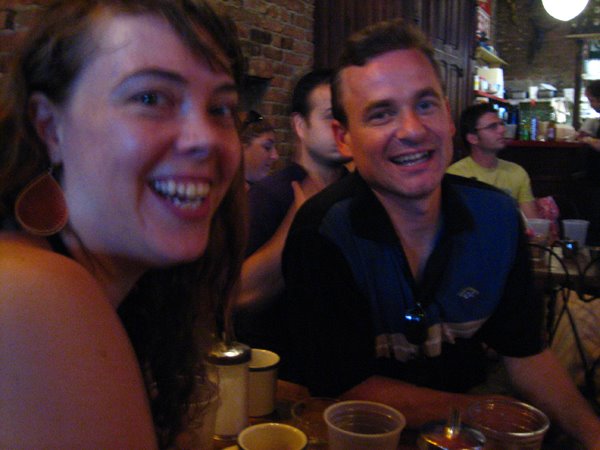 Katie Ainslie and Scott Frederick during the EURO 2008 at Robin de Bois, June 29

On June 29th at Robin De Bois, in Carroll Gardens, I watched the Soccer EURO 2008 finals with some interruptions due to the rain in Brooklyn causing the satellite to go out a few times. To top off the somewhat unnerving experience, Spain beat Germany and the last few moments I had to watch at the Irish bar next door which was filled with singing Spain fans.

Yet before I had to ride my bike home in the rain, fate started to turn… most magically: During the last few minutes of the match I met Scott Frederick through my friend Katie. Somehow he mentioned the bar Buttermilk and I told him that five years ago my wedding ring had suddenly flown off my finger, bounced on the floor and rolled into a crack and disappeared into the sub floor. After some creepy explorations of one of the basement’s rooms (cavernous, dark and empty besides a white bucket, an empty pack of Marlboro Lights and a hatchet), digging around with a grabby car mechanics tool in the crack of the floor and a few attempts to track down the owner of the bar, we gave up the search and made peace with the fact that at least I knew where my ring would rest and that after all it was a cool bar. Then Scott Frederick tells me that he is one of the owners of Buttermilk (and also my all-time favorite Great Lakes) and that I should come by in the following days to see what could be done. Oh, did I mention that the next day was our 12 1/2 year wedding anniversary? Or how about the fact that I hadn’t been to Buttermilk in a year or two since I had moved, yet two different unrelated plans came up that brought me to the bar a few days before.

So a few days later I meet Scott Frederick at his bar and show him where the ring went down five years prior (possibly to the day, I’ll have to check that sometime). I told him if they’d ever renovate and tear up the floor to get in touch with me. After all I don’t see how else we could get to it. He makes an attempt to saw a hole into the floor – but the battery dies. He says he’ll be back in touch.

I take off. Have a wonderful time at the Murakami exhibit at the Brooklyn Museum of Art with John J. and Jessica G. followed by drinks in the garden of Soda. An almost perfect day… until I get the call. Scott Frederick has sawed open the floor of his bar and after 5 years of laying amongst playing cards and poker chips my wedding has been unearthed by the man who I’d like to call from now on the Patron Saint of The Wedding Ring. He even delivered it.

To be honest it would have been great to get the ring back right away after it was lost. It would have been a happy ending to a sad story. But having it returned after 5 years and right in time for our anniversary feels like a miracle and makes it even more special.

I’m not sure yet how I can thank enough the man that already gave me one of my favorite bars with the best jukebox in NYC (Great Lakes, that is) but now also gave me back my wedding ring!!! But I hope one day I’ll figure something out.

Thank you so much, Scott! 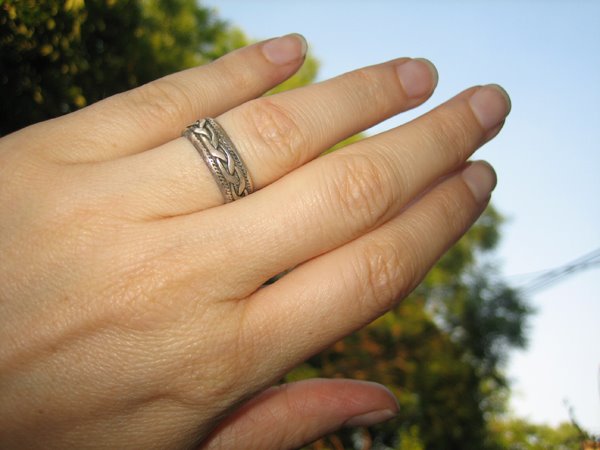 The wedding (and engagement ring) back where it belongs after 5 years hiding in the sub floor of the bar Buttermilk in Brooklyn, July 2