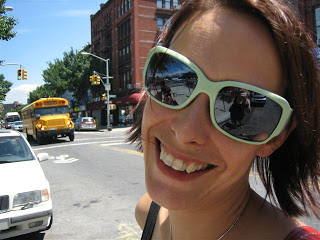 Rachel Iannelli, one of the three women starring in my documentary All’s Well and Fair, just visited us for a few days with her husband Nick and son Cecil. They were on the return trip from Vermont where they had dropped off her daughter Tessa at culinary arts school.

Of course, this is quite a milestone for Rachel and Tessa. But because Tessa was a little 7-year-old during the filming of the first part for All’s Well and Fair I’m also struck by the fact that this year Tessa turned 18, graduated from high school and moved out to go to college in another state. Wow!

While we missed out on visiting with Tessa this time around, it has been great to have the rest of the family here. Besides some celebrating and reminiscing I also had the opportunity to show them the trailer for All’s Well and Fair. Rachel and Nick both really liked it!

Actually, I don’t think I ever got around to noting here that I cut together a 7-minute work-in-progress trailer for the documentary. I just finished it before our trip to Germany and in the midst all the casting activities.

It’s been quite magical to finally put some of the 1996 footage together with some of the 2006 footage. In this case the product is clearly bigger than the sum of its parts.

Almost a bummer was when instead of using the degraded 1996 edited version (3rd generation VHS) I used the original VHS footage and it turned out to look so crisp that the contrast to the DV footage of 2006 might not be stark enough for everyone to be able to tell apart the time shifts. I might just have to make the 1996 footage look worse through digital effects! That’d be quite funny.