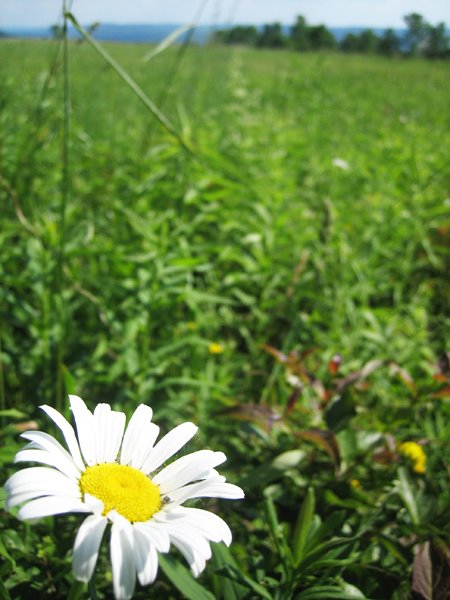 I can barely keep up with documenting all the travel & screenings of the past – while setting up the travel & screenings of the future. So with a few days delay here’s a recap of Scott and my trip to the Finger Lakes Region in upstate New York where All God’s Children played at the Curtis Baptist Church in Campbell, New York. Side fact: Campbell is pronounced Camp Bell. Who knew? On Saturday, after 5 hours of driving through torrential rain the sky finally cleared up just as we got to the Finger Lakes Region. Now that driving was fun again, we circled around Keuka Lake until we found the perfect dinner spot at Waterfront Restaurant, which was right on the water and allowed the other guests to just hop in and out of their boats directly from the deck where we ate. 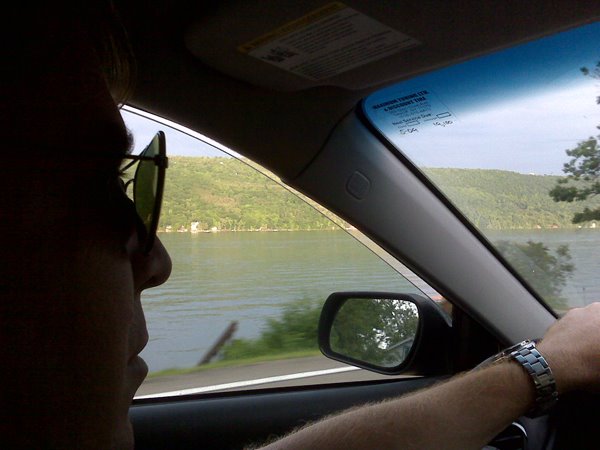 Passenger side’s perspective of Scott driving us around Keuka Lake

Later that evening we got to catch up with Dianne and Bud Couts, who had driven over from Ohio. 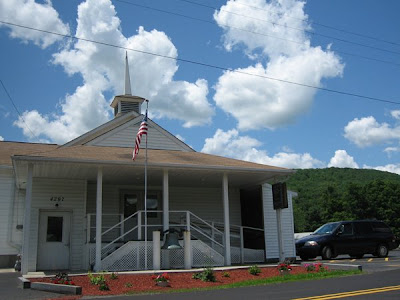 The next day we joined the Curtis Baptist Church’s congregation for lunch. We finally met the organizer of the screening, Shary Kroeker Hauber, who had also attended Mamou Alliance Academy, and the host, pastor Dale Ingraham, and his wife Faith. Many thanks to all three of them for having our film at their church. Shary, Bud and Dianne talk outside the church on this perfect summer day.

While we had sat out front of the church, apparently a lot of people had come in the side door or just come up directly from the lunch downstairs because once we walked inside there were A LOT more people than I had expected.

A big thanks to everyone who came out. It seemed too beautiful of a day to sit inside and watch such a dark film. Thank you also to Tim Hauber for the projection of the film and Bud Couts for handling the DVD sales. 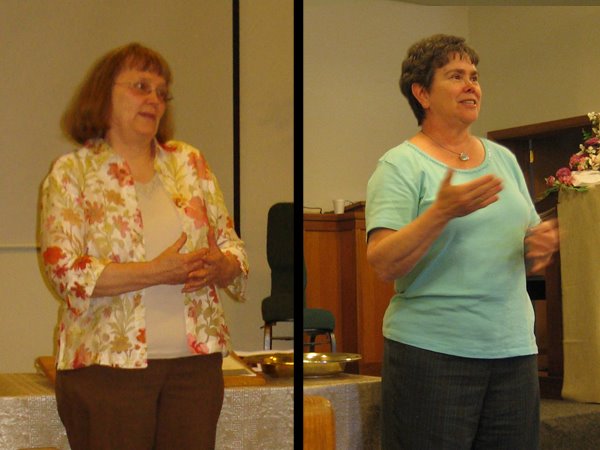 Shary and Dianne talk after the screening.
(left picture by Bud, right picture by Scott)
It was a real treat to have Shary Kroeker Hauber at the screening – answering questions from her community after they had just watched a film about the missionary kids boarding school she attended and the abuses that took place there. Shary does not appear in the film and we had never had the opportunity to talk to her; so it was not only great to meet her but also to hear her stories of life as an MK in Africa.

Dale and Faith Ingraham have a special ministry called Speaking Truth In Love Ministries (Stopping Sexual Abuse in the Body of Christ). So a lot of the audience was already very aware of issues around abuse, especially by clergy. Dale, Faith and us exchanged a lot about our goals and methods of getting the facts out about abuse and its repercussions. A very inspirational day. 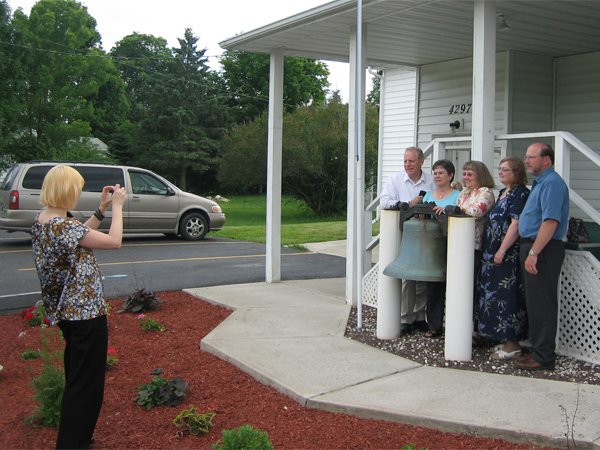 Scott took this picture of Luci taking a picture of… 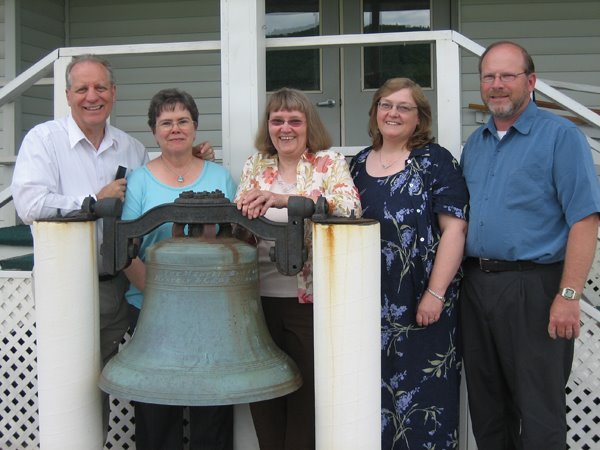 Bud and Dianne (Darr) Couts, Shary Kroeker Hauber, Faith and Dale Ingraham
We said good-bye after dinner and Scott and I took off for a sunset walk through near-by Corning – known mainly for its biggest employer, Corning, Inc., which makes glass wares and ceramics, and the Corning Museum of Glass, which we skipped. Appropriately glass-esque, the headquarters of Corning, Inc. also happen to have a Japanese flair. To the right the Gaffer Tower.
Not only did we see the Gaffer Tower, we also walked through the Gaffer District, past the Gaffer Grille and apparently none of them have anything to do with the person setting up the lights on a film shoot. Must be a glass thing. Never stop learning.

Also upstate New York is not actually a different state than the one New York City is in, although it certainly looks and feels like that. Therefore it’s not really appropriate to say: “Bob Evans has been our unofficial caterer on this screening tour – we’ve eaten there in Ohio, in Missouri and now here in Corning. You know, we don’t have Bob Evans in New York.” Because apparently we do – just in that other part of our big state, the gorgeous part. 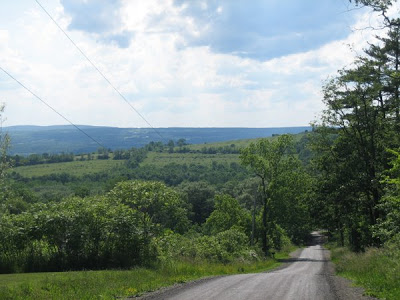 Driving towards Seneca Lake
Monday morning started with an interview (the result should appear in print this Sunday), then lunch in Watkins Glen and we were finally off hiking in the Finger Lakes National Forest. 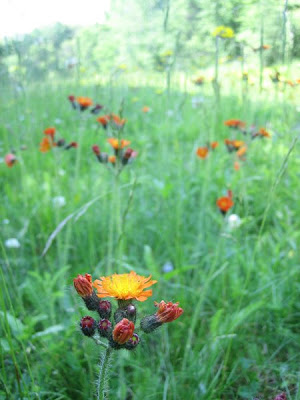 Flowers near the ponds at top of Gorge Trail 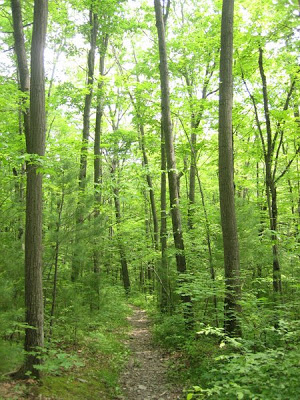 Further along the Gorge Trail Towards the bottom of Gorge Trail

After hiking for 3 hours along three different trails, we just barely made it to the nearest winery at 5:27pm. Apparently they all close at 5:30pm. We had a quick taste, picked up a few bottles of Penguin Bay wine and started the long drive back via Pennsylvania and New Jersey to “the other New York” . 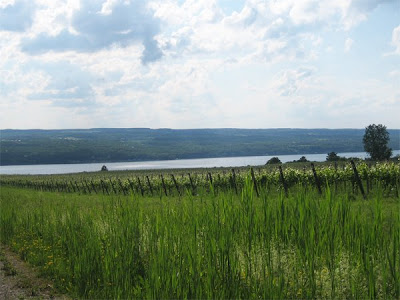