Skip to content
Tweet
Share
Share
Pin
Share
0 Shares
As I’m working overtime on the DVD release, NYC premiere and the transmedia release of All’s Well and Fair (all happening next week!!!), I’ve almost overlooked sharing some notes and pictures here on this blog (vs the All’s Well and Fair Facebook page) about the actual world premiere of my documentary in Gainesville where the film was shot.
The film premiered on April 18th in Gainesville, Florida, the college town where the film was shot in 1996 and 2006. The location where the actual event took place is a really cool and still rather raw space next door to the super popular alternative bar/restaurant The Top and therefore aptly named: The Top Secret Space. Housed in a former Woolworth with old lamps and exposed beams it created just the right atmosphere for our unconventional and time-traveling documentary.
Of course, every trip back to Gainesville is a homecoming to me. It is still a place that I consider part of my roots and home of some life-changing times, including the making of this film. So it was wonderful to come home this time with the finished film in my pocket.
Two of the women featured in the film, Rachel Iannelli (nee Guinan) and Margaret Briggs, were actively involved in setting up the screening and hanging flyers and making sure we had enough chairs and cold beer at the screening.
When the big night came I was quite nervous, I’ll admit it. The finished film had only been seen by a select few and never in a room full of people.
But quickly the night turned into a bit of a joyous reunion as old faces started showing up… We had a full house – although there were still quite a few people I missed that night, including Tina Bushnell, the third mother in the film, her son Jefferson and Rachel’s daughter, Tessa.
We dimmed the lights, the film began with the first statement from Margaret… and… they laughed. And it was a part that was supposed to be funny. Every filmmaker must know that feeling when they show their film for the first time and it gets to the first funny line and the build up and then: they laugh!
I experienced again that the first and best thing you can say to quickly describe a good screening is: they laughed at all the right parts. I was actually surprised how much they did in this particular film, because I don’t think of it as a comedy. But those women are just so witty and awesome that there are quite a lot of those moments.
I did see some tears as well and based on the conversations after, the film also provoked some thoughts and discussion. And you can probably imagine how wonderful the sound of applause felt after years of editing and anticipating that moment. 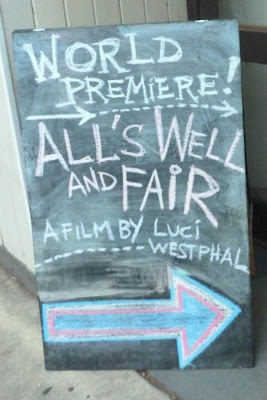 After the film finished, Margaret, her daughter Tempra, Rachel and participated in a Q&A and then we spent a good while celebrating a successful premiere with some of our friends. A perfect evening.
For those of you who follow my series In A Brooklyn Minute aka In A Berlin Minute: the guy in the black T-Shirt is Jason Matherne of Goonygoogoo Productions, who provides most of the music for that series.