Skip to content
Tweet
Share
Share
Pin
Share
0 Shares
After six consecutive months in Berlin, I’ve been back in Brooklyn for a little over a week. On Friday I’ll be back in Berlin. Saturday in Hamburg. Next weekend in Bremen. It’s what I wanted, right?
After 17 non-consecutive years in the US (11 in NYC), I wanted to spend more time with my family and friends in Germany…. get out of New York for a while to travel and see more of the world… gain fresh perspective… meet new people… find different inspiration… create new work… go on an adventure with Scott. But we didn’t want to give up NYC completely. I can see myself growing old here – just not quite yet.
So in spring of this year I started our temporary move to Berlin with Scott finally following in July. It’s been an amazing experience with all those desires coming true, like reconnecting with family and friends and building new friendships, which I hope will last a lifetime.
Experiencing Germany from the perspective of someone who has lived in the US for so long is quite fascinating. A lot of my observations are in tune with my “other” ex-pat friends who say things like “Germans don’t want to necessarily teach you something when you ask, but they always lecture you when you make a mistake”. And my own statements regarding customer service: “People in Brooklyn seem to be so full of themselves that they just don’t give a s**t about you, but people in Berlin seem to actually hate you.” But don’t get me wrong. I love it in Berlin and I can’t deny that I’m German – if a confused one.
Starting more or less from scratch professionally has been a great boost. Directing the music video for “Just So” by Agnes Obel, finishing the edit for Status: Thriving and, of course, launching my own weekly 1-minute web series “In A Berlin Minute” have all been extremely gratifying creatively and professionally. And we are gearing up for more projects in Berlin… 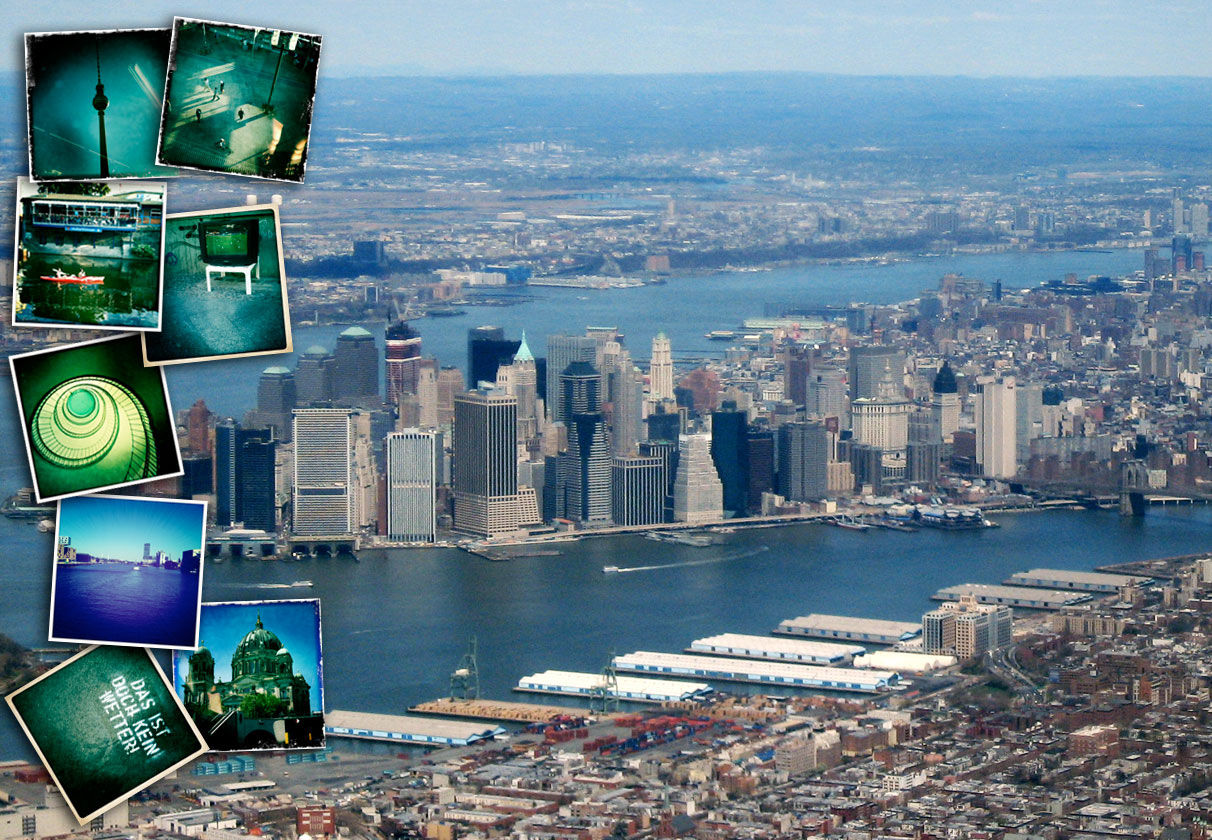 “German New Yorker in Berlin” Twitter background image
Then Scott got a job offer (for a limited time) from Bright Red Pixels to produce Daybreak, a new web show for aol – and within a week he was back in our apartment in Brooklyn with our cats – while I realized I wasn’t ready to just turn my back on Berlin. On the contrary, we’re now fully bi-continental… and wasn’t that what I wanted? Yeah, well, maybe with a little less time apart?
So now I’m also in Brooklyn – for Thanksgiving, to deliver Status: Thriving and to set up other projects – and to see Scott, the cats, my friends and my city.
Remember that Red Hot Chili Peppers song “Under The Bridge” and how Anthony Kiedis would refer to LA as “she”, as his partner? It sounded a bit silly to me at the time and I don’t think I got it until I was ready to leave NYC for Germany. I actually love this city [NYC] as if it was a person… um, a person that I’ve lately referred to as an expensive whore. But you know, she’s real good, despite the heartache she may have caused over time.
The few hectic days before returning to NYC on this trip I was as giddy as if I was going on a date.
Once back in the streets of Brooklyn it felt surreal. After six months in Europe, I looked at it from a different perspective: everything looked like the backdrop for a TV show set in New York! At the same time I knew everything by heart. This has been my street for six years. That’s my neighbor Fran picking up her daughter from the Waldorf school and that’s our mailman Ron – not characters on CSI NY.
Then I saw my friends: at noisy local bars, Thanksgiving festivities, quiet dinners, mellow brunches, quick meetings over a cup of tea… and it all clicked into place… from the moment I saw Erica and Scott pull up in the van at the airport… to meeting Kyra, my oldest friend in the city, for a veggie hot dog dinner at Bark (right across the street from where Chris used to have the best parties 12 years ago)…  a calm came over me and I realized, you my friends, are all my anchor. My true home is in those moments when we can be together. And then it all doesn’t feel surreal anymore, it feels wonderful!
Now I’m sad to leave here again but excited to be back in Berlin in 48 hours to see my friends there, then have a weekend with my family near Hamburg to celebrate my dad’s birthday and then welcome Caitlin from Brooklyn and tag along to Bremen to meet people who are close to her heart.
And maybe one of these days I’ll get to visit Jessica in Thailand and Kevin and Elizabeth in Ireland and Steph and Gitty in London and then back to Brooklyn and… all the while I know that when I’m far away, I’m home with you.

—
P.S.: I actually wanted to add a few photos from 11 years in Brooklyn and 6 months in Berlin. But it turns out that all the old photos are in storage. I guess that’s one of the prices you pay for “living in-between places”.

P.P.S.: In case you’re interested in hearing more about a city as a living organism, check out the awesome Radiolab episode “Cities”.

One Reply to “Between Brooklyn and Berlin”

Party today... at @creativegrape_ for the opening