Two weeks ago I was inspired to write about this – but somehow more important stuff (work) kept getting in the way. Now God Help The Girl’s “Funny Little Frog” just played on my iTunes (so lucky to be able to listen to music while working) and I remembered.

So please just pretend it’s the Monday after Halloween – or if you’re staying on top of your music news, feel free to tell me that most of this is pretty much old news from at least 6 to 12 months ago anyway – but not quite as old as the first concept album, which, according to the all-knowing Wikipedia, was released by Lee Wiley 70 years ago.

But to get to the point: Halloween night I was delighted to attend the live performance of “The Long Count” at BAM, the Brooklyn Academy of Music. (Thank you, Erica!) 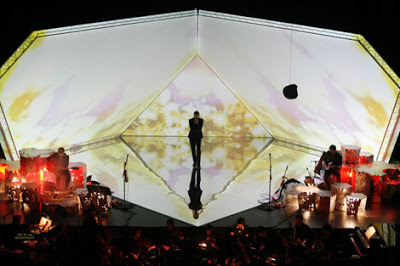 What we experienced that night was a magnificent production loosely based on Mayan mythology (involving twins, ball games and the Mayan calendar that some claim predicts the 2012 destruction of our world) and conceived by visual artist Matthew Ritchie and the musical wonder twins Aaron & Bryce Dessner of The National. Experimental video projections underlined the thirteen songs played by an orchestra and mostly featuring vocals by the twin sisters Kim and Kelly Deal (The Breeders/Pixies), Shara Worden (My Brightest Diamond) and Matt Berninger (The National). I wouldn’t say that there was a clear narrative you could follow (although the program provided explanations and connections) but I don’t think that was necessary to enjoy the atmosphere and beauty that was created.

Download: Live recording of “The Bull Run” from ‘The Long Count‘ (Spinner.com)

The joy it evoked reminded me of going to the opera (which I used to do a lot when I was a teenager in Hamburg and which I just put on my “things to do in NYC before I leave” list). But it wasn’t an opera or a musical or (dare I even write this?) a rock opera. Ben Ratliff called it a “multimedia orchestral-rock song cycle” in The New York Times review, which seems quite fitting in a European salon sort of way.

And then the next day, during a much overdue record shopping spree, I was reminded of the perfect term, if only they would RECORD the “song cycle”: a concept album.

High on my list of records to get was the self-titled album by God Help The Girl, a project put together by Stuart Murdoch (Belle & Sebastian) and featuring a variety of female singers, some of whom had submitted auditions via imeem.com. So this album already had a “concept” in the way it was produced.

The record has been out since this summer and I fell in love with it bit by bit through free downloads of various songs that were made available for a limited time through their website. Goes to show again that circulating free songs can boost sales. To be quite honest, I also believe that not-officially-endorsed (read “illegal”) free downloads can boost sales – as per this article in The Independent.

BUT it’s even better when you get the actual physical album. Because what I hadn’t realized until I bought it was, that the entire record was a concept album in the purest sense: it came with a full short story and an indication of which character sang which song and all the connecting pieces. So suddenly a few songs that pop up in different mixes have turned into something more magical: an album you want to sit down with on the floor in front of your stereo with headphones on, flipping through the liner notes… 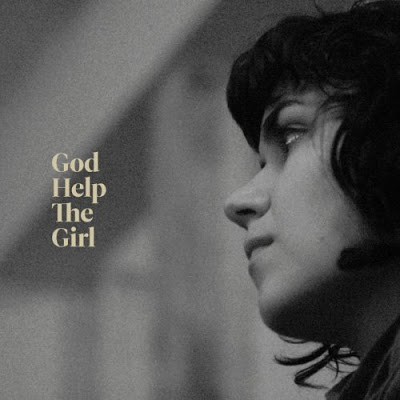 Could this even be a new trend? Maybe one that is to encourage the listener to buy entire albums again instead of just purchasing a song download here and there? There were a few other recent albums that came to mind, like The Decemberists’ “Hazards of Love” (although Colin Meloy apparently prefers to call it a folk opera) and their previous release “The Crane Wife”. And then there’s Green Days’ “An American Idiot”, which has been turned into an actual on-stage musical. Can we call it a punk rock musical… if it’s on Broadway?

No matter if this is a trend or even if this is financially motivated, I just realized that I’m a sucker for the concept album because I love stories and music. This makes God Help The Girl my favorite album of the moment – fighting off serious competition from The Avett Brothers and Elizabeth & The Catapult and Florence & The Machine (… during the same shopping spree I was also looking for Marina & The Diamonds; making me wonder what might be the cause for the naming trend…)

Even my favorite dance song right now is by God Help The Girl: “I’ll have to dance with Cassie”. Go get the album. Legally, of course.