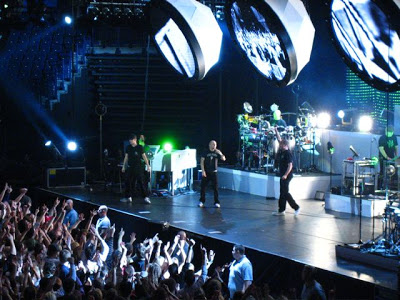 On Monday I received a spontaneous invite to tag along with my friend Cordula and her friend Bine to the Colorline Arena in Hamburg and try to get some last minute tickets for Die Fantastischen Vier, the probably most popular German hip hop band. I had completely given up hope that I’d find someone to go with since everyone had already seen them in smaller venues and wasn’t into the idea of a stadium show.

Since I made it to the end of a rough cut draft that day, I was ready to celebrate. We scored amazing tickets very close to the stage (relatively speaking, of course, it is an arena). And the show was, well, fantastic. They rapped, they jumped, they entertained.

German hip hop has quite a different feel than American hip hop. German words for the most part have more syllables and the rhythm of emphasis is different as well. Also, the subjects of the lyrics are different. Less gangster, more deepish thoughts, less ho’s more… fun for all, I guess. At least with this band. 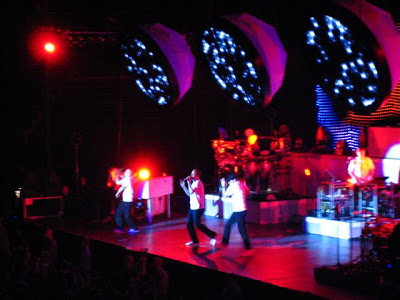 And it actually was quite fascinating to be at a stadium show, with all the fancy lights and projections and thousands of people jumping along. The guys also had a camera on stage that sent a feed with a minimal delay to a huge pixelized screen behind the stage. Had a very cool PXL Vision feel.

I was a little disappointed that they didn’t play “Lass die Sonne rein”, a song I always listen to first, when I run (which isn’t often enough – neither the running, nor the listening to that song, which is a true picker-upper).

Also a bit of a let-down that I didn’t get to talk to anyone from the band after the show like I somehow managed to do after the other three shows I saw during this trip. But I guess with an audience of 12,000 it was a bit overwhelming for them. 🙂

Here are some terrible sounding and blurry videos taken with my “still” camera.