Gainesville, Florida, is a college town in Northern Florida – home to the University of Florida and Santa Fe College.

Gainesville (Florida) – In Another Minute (Week 321)

Gainesville is also home to my ongoing documentary series “All’s Well and Fair”
– for which I filmed again this week, as I’ve done every 10 years since
1996. It also happens to be the town where I met my husband, Scott
Solary, where we were married and where some of my dearest friends live.
So you can imagine that Gainesville, Florida, is exceptionally special
to me… and this 1-minute video is a long time coming.

Because
for the two weeks I was in town, I mostly filmed interviews and b-roll
with the three families of Tina Bushnell, Margo Briggs and Rachel
Iannelli, I only got around to filming footage of the city during the
last few days. I didn’t get to capture every place I wanted to. But for
now it’s probably a good thing – because I already had to make many
tough decisions to get the video down to just 60 seconds. Hopefully, the
supporters of Patreon will vote for this video to be turned into a longer version next month.

Gainesville,
Florida, was founded specifically as the Alachua County seat in 1853,
along the proposed railroad line from Cedar Key (Gulf of Mexico) to
Fernandina Beach (Atlantic Ocean). However, there had been Native
American (Timucua) settlements for centuries beforehand and also the nearby European settlement of Hogtown. Gainesville is named for General Edmund P. Gaines, who was a commander in the Second Seminole War.

In
some circles, Gainesville is probably best known for the University of
Florida (UF), the 9th largest university in the USA, and its football
team, the Florida Gators.
To me and many others the draw has been the music, art and alternative
culture scene – which, at times, included Tom Petty, members of The
Eagles, Bo Diddley, Against Me!, Hot Water Music, Less Than Jake, Alison
Mosshart (The Kills), River and Joaquin Phoenix, Maya Rudolph, Harry
Crews, Jerry Uelsman, among many others. It certainly has and will
continue to inspire me.

In this video, you get glimpses of:
Old signs and new murals
University of Florida – UF
Santa Fe College (downtown campus)
The Blue House that’s now a green house
Rachel and Nick’s soon-to-open restaurant Tamal
Satchel’s Pizza
Bo Diddley Community Plaza
Hippodrom Theatre and downtown (where I showed my first films)
Death or Glory tattoo parlour (where the mothers and adult children of “All’s Well and Fair” + me got matching tattoos by artist Anna Mack)
Duckpond neighborhood with dream homes, live oak trees and an otter (!)
Bernie Sanders sign (capturing the times)
Bivens Arm (lake) with rainbow, alligators and sunset
The Strawberry Moon setting in the early morning
The Hardback Café – reopened after 15 years in a new location on University Avenue
Hollie Greer and Rachel Iannelli… if you can spot them

Side
note: Gainesville is in population size (city: 128k, urban: 188k)
rather similar to Fort Collins (160k), Colorado, where I live now. The
similarities continue with both being college towns and having a rather
liberal slant. However, Ft. Collins gets those long snowy winters and
Gainesville has ridiculously large spiders, bugs and those alligators.
Fort Collins has the wonderful mountains, rivers and lakes (without
alligators) and Gainesville has no winter! You choose what you’d prefer.

The song in this video is “Always Makin’ Me Blue” by my Gainesville friend Jason Matherne of Goonygoogoo Productions. Thank you again and again, Jason! 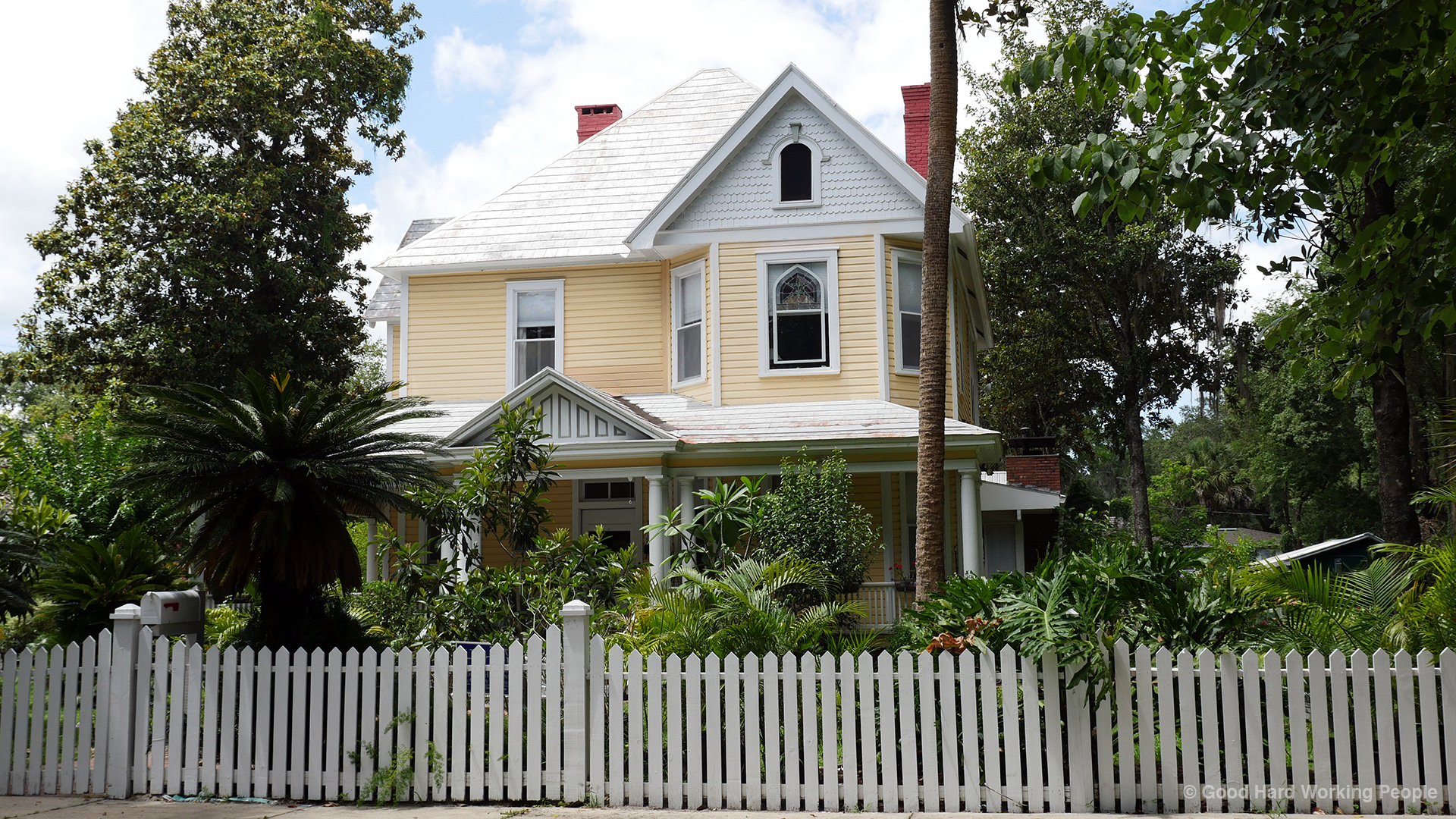 Soon, I will publish more photos of Gainesville on my personal blog and in the In Another Minute Flickr album. Also, in about a year, I’d like to see the latest version of “All’s Well and Fair” published…