Skip to content
Tweet
Share
Share
Pin
Share
0 Shares
Seriously, go see Sharon Jones and The Dap-Kings play live. They’re currently on tour. They’ll be in Hamburg tonight and in NYC on New Year’s Eve. There should be plenty of chances in-between. You can even win an exclusive photo pass here.
Scott and I saw the Brooklyn band perform at Huxley’s Neue Welt in Berlin last night. Now, I’ve been playing their last two albums up and down all summer – and this means quite a lot for this former gothic/punk rock kid who’s been mellowing out over the years with lots of indie rock and the occasional electronic dance music… But the sudden love for soul and funk music? Only the fabulous Sharon Jones could make that happen.
So I knew she had an incredible voice and that the band could play. But I was blown away by the whole live experience: a non-stop entertainment ride. The music, the singing, the story telling and the overwhelmingly energetic dancing.
To show you some of her moves, here’s a quick video I recorded last night of Sharon Jones doing the Boogaloo.
Sharon Jones and The Dap-Kings leader impressed also by how they were able to build up and direct the audience, who gladly followed along; including literally begging for Sharon Jones to come back on stage – yelling “Sharon, we need you!” in unison.
And after the show? Sharon, The Dapettes and a few of the The Dap-Kings hung around the merch table and signed posters and records. You bet we were first in line. This was the first time I got an autograph since meeting Nick Cave and Blixa Bargeld backstage in Hamburg 1990.
Um, I even made Scott pose for a picture with Sharon… 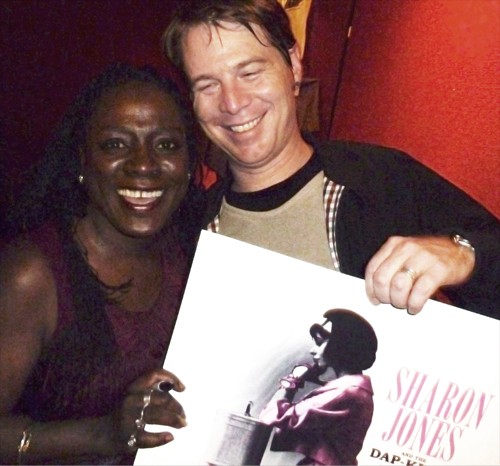 So, what are you waiting for? Go!

One Reply to “Go, See Sharon Jones and The Dap-Kings”