On August 11th, at Tribeca Cinemas, we finally had the New York City premiere of All God’s Children.

After having been invited into the homes and lives of the people featured in the documentary and getting to know their families and some of their most intimate stories so well, it meant a lot to us to finally be able to share a bit of who we are with them by being able to invite them into our home, our city and introduce them to some of our friends.

And it was one of the most wonderful experiences for us to finally let our friends see what we’ve been up to all these years. Even though some of our friends and peers had seen various incarnations of the film throughout the making of it, none of them had hat the experience of witnessing the survivors featured in the film talk about the reality of their story face-to-face. We believe that it adds a whole other level of emotion and understanding and we were grateful to finally be able to share this experience.

So all together the New York screening and all the wonderful visiting (delicious lunches and dinners and Brooklyn bagel breakfasts, walks through Brownstone Brooklyn and Tribeca and various sights and always talking, talking, talking) were a huge success.

A big thank you goes out again to everyone from the film who was able to travel to New York for the screening: Marilyn Shellrude Christman and daughter Sarah, Beverly Shellrude-Thompson and husband Ernie and daughter Nicole, Dianne Darr Couts and husband Bud and Rev. Richard Darr.

The next thank you goes to everyone in the audience for being so welcoming and interested – for all the great questions and suggestions; and also again another big thanks to those of you who helped throughout the years with your feedback, suggestions and support.

And finally thank you to all who made the New York screening such a success: first of all, Sylvia Savadjian for the publicity, Tara Littman for hooking us up at Tribeca Cinemas, Ryan for coordinating the event, the entire Tribeca Cinemas staff for being such great hosts and last but not least, Katie Ainslie and Emily Ruzzo for selling tickets and working the door, Matt Weiss for recording the Q&A and Bud Couts for manning the merchandise table and Alex Ward for the beautiful flowers.

Here are some impressions from the NYC Screening events: 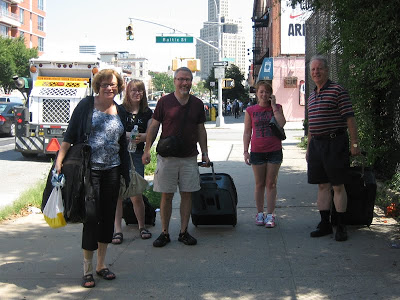 Arrival in Brooklyn. Beverly Shellrude-Thompson, daughter Nicole, husband Ernie and niece Sarah are greeted by the summer heat on the way to their hotel. Bud Couts, who we had driven up with from DC Sunday night, is always the gentleman and helps with luggage. 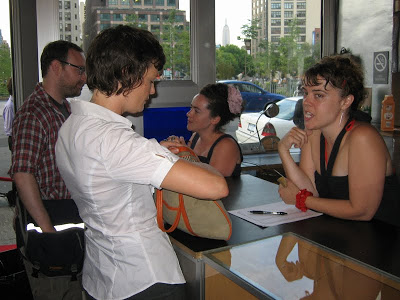 It wouldn’t have been the same without the help of these dear friends. On the left, one of our friends from the pre-NYC film school days, Matt Weiss, recorded the Q&A for archiving. BFF and filmmaker Katie Ainslie and Emily Ruzzo are working the RSVP list and are selling a ticket to another friend, Ginger Albertson. Thank you all for your help and support! 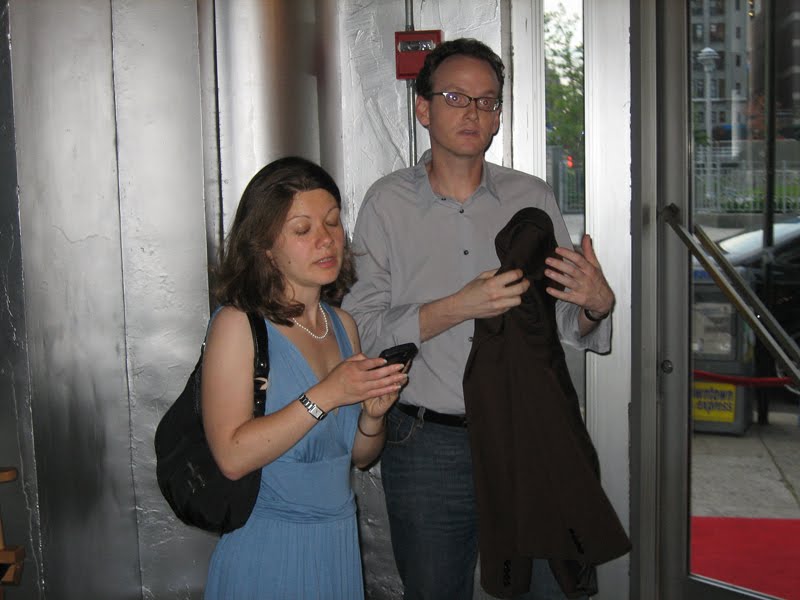 The amazing publicist Sylvia Savadjian never stops working. But why is STV The Reeler VanAirsdale not writing something? Thank you, Sylvia, for your wonderful work in publicizing this screening! And thank you STV for your blog post and continued support. 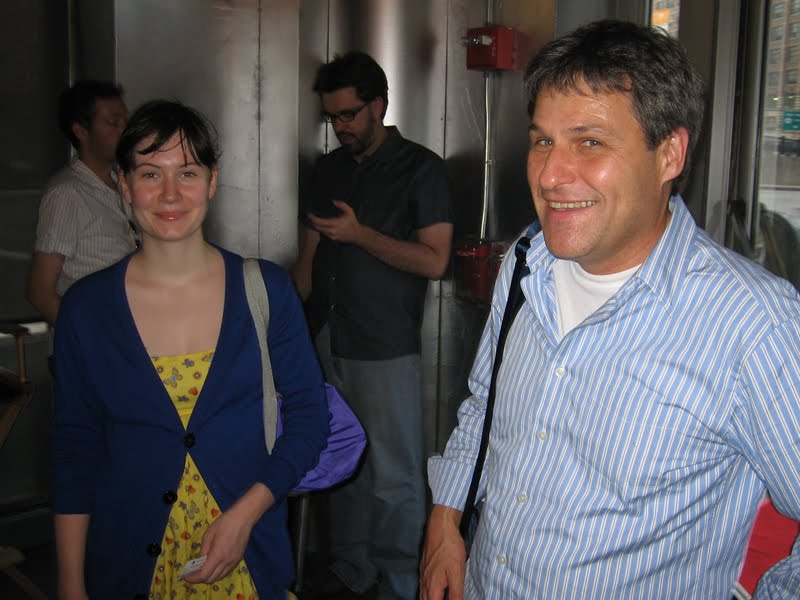 Tom Lino, filmmaker and sound designer, brought all the pictures and previously silent Super 8 footage in the film to life. We cannot celebrate Tom enough. Next to him is his niece Tatjana and in the background are Justin Day and Eric Mortensen, some of the masterminds behind blip.tv. 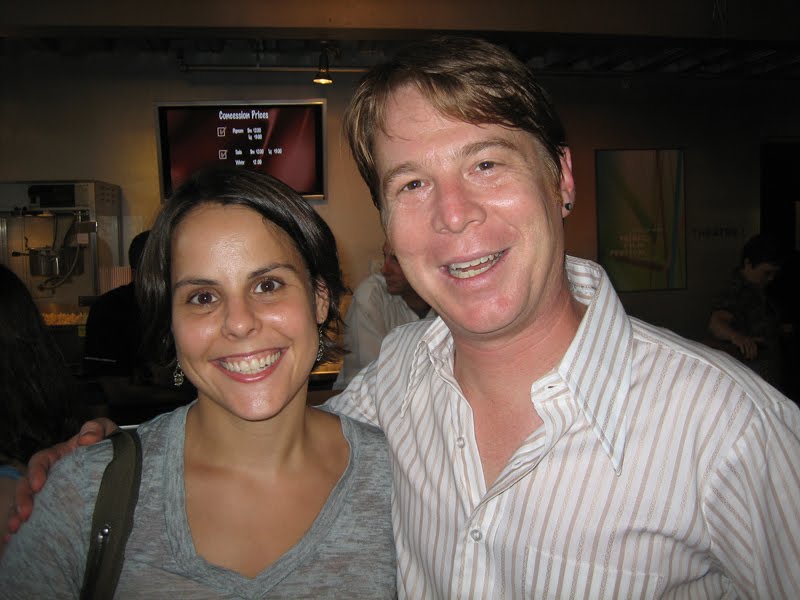 Long-time friend and filmmaker Anne Carkeet with Scott before the screening. 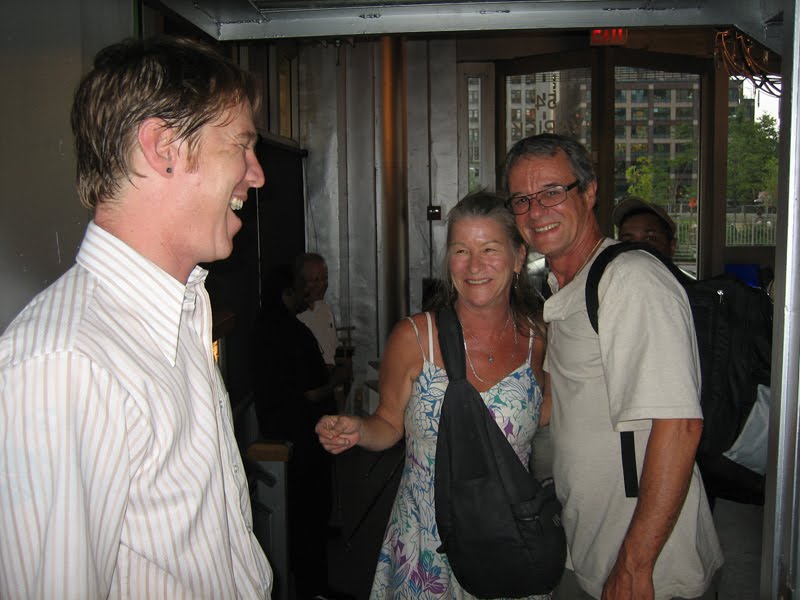 Scott with our neighbors and friends Jeff and Beth Knowlton. Behind them another neighbor, Tony Falwell, is just arriving. Usually we don’t post pictures of the audience – to preserve everyone’s privacy. But in this case we didn’t think you’d mind – especially since you can’t see anyone too clearly – and everyone has red eyes. 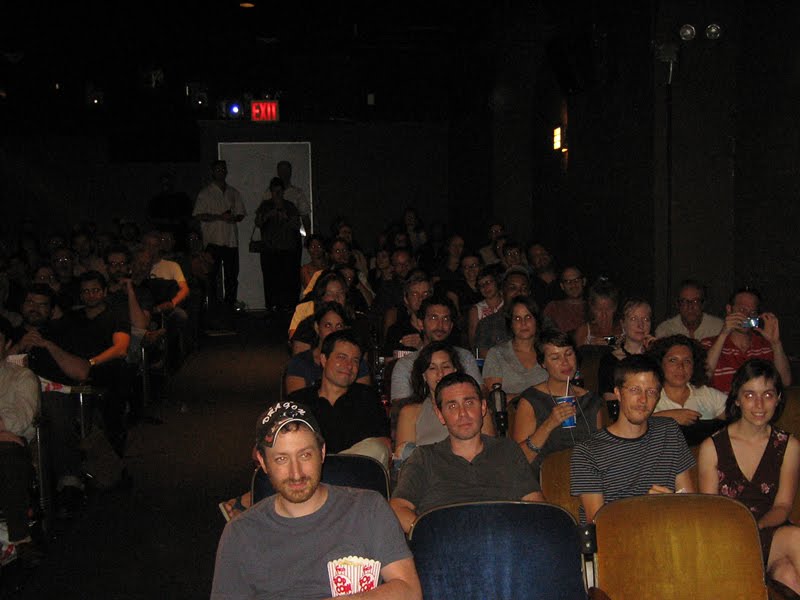 Thank you all so very much for coming out to watch the film and to support the MKs through your warm reception and interested questions and suggestions.

I can’t help but give extra kudos to Jesse Cowell (in the front) for his excellent web series Drawn By Pain (about a girl growing up with an abusive father and her journey of empowerment). Bev and Marilyn on the red carpet outside Tribeca Cinemas. 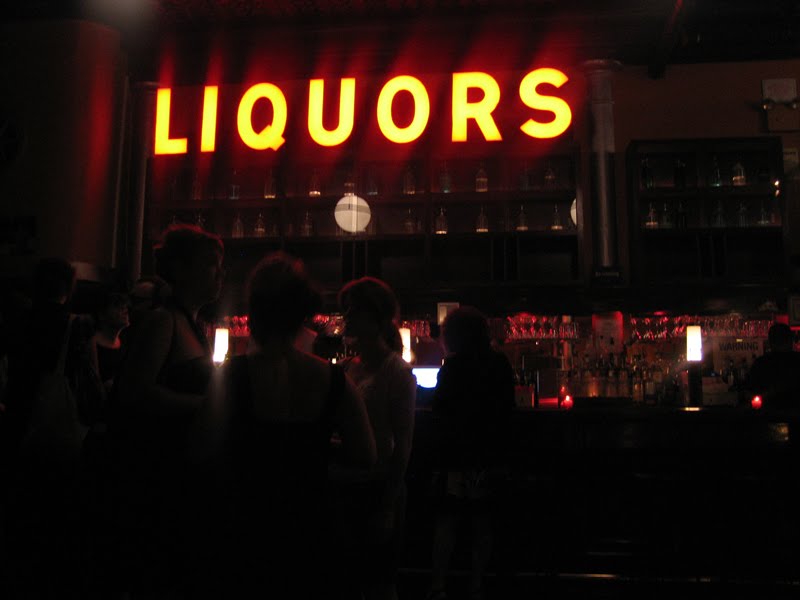 Katie, Emily and Adele at the after party in the “dining room” of Tribeca Cinemas. Exactly 10 years ago Scott worked his first NYC job in that very room as a waiter when it was still a restaurant & art house theater called Screening Room. At the time he also interned at Good Machine, which was across the street (and eventually closed as well). In-between we’ve attended many film parties at the venue. It’s been a long road – but we couldn’t have had a better full-circle location for the NYC premiere of our first full-length film. 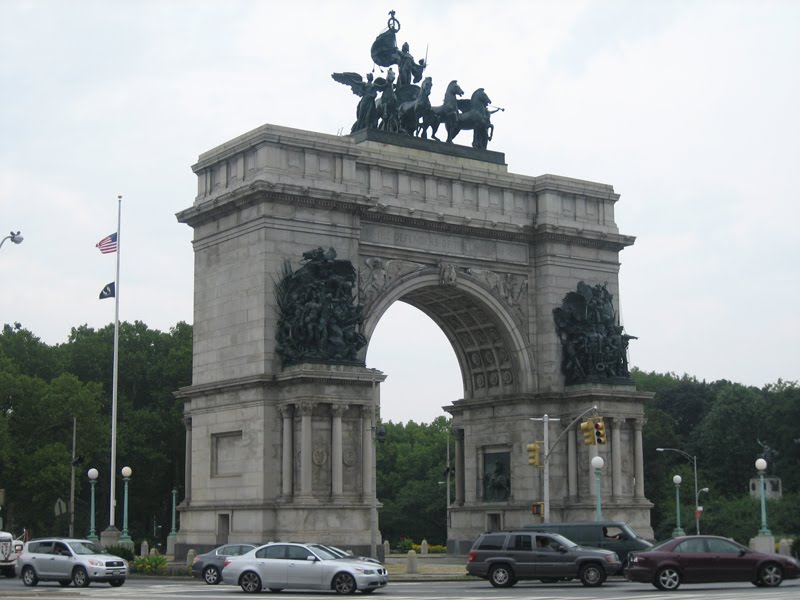 The day after the screening Bev, Rich, Marilyn, Scott and I went for a relaxing walk through Park Slope up to Grand Army Plaza and… 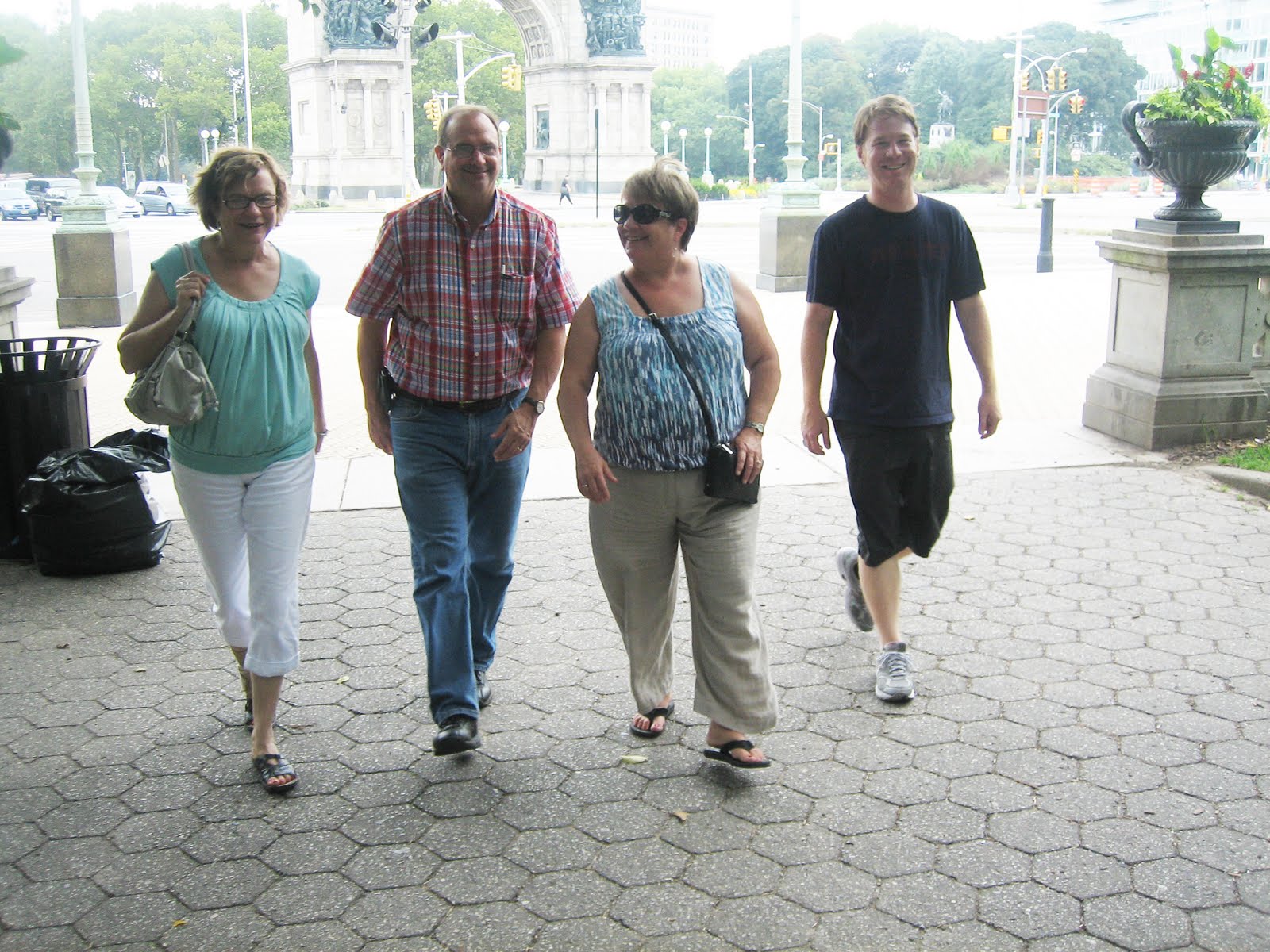 … into Prospect Park. All the while scheming our next steps with the film and listening to their plans for more advocacy work.
Moved, inspired, motivated, energized and also gratified. A wonderful week full of wonderful people, conversations, contemplations and companionship.

Very excited about what’s next. Later this week I’ll be flying to Seattle…

2 Replies to “Impressions from the NYC Screenings”