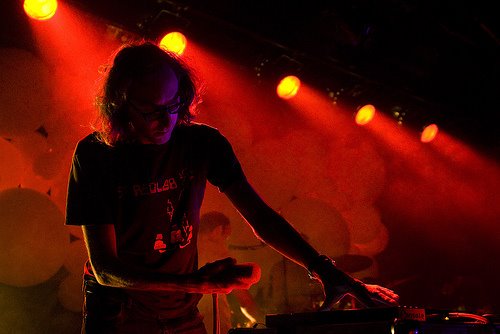 Martin Gretschmann aka Console of The Notwist
photo by _christof

Last night the German band The Notwist played a beautiful show at Webster Hall. Their changes in music genres (they used to play quite energetic cross-over guitar music back in the 90s, which I distinctly remember listening to back then at my dreadlocked friends’ basement apartment in Hamburg’s Königsbergerstrasse – while now they are more closely associated with moodier electronic compositions), their unique mixing of instrumentation and style and their sense of innovation was captured perfectly in a moment when programmer Martin Gretschmann was “playing” his sequencers with wii remotes while singer/guitarist Markus Archer was spinning an actual vinyl record with his guitar hanging around his neck. All the while the rest of the full band, including a drummer with a standard drumset, played on.

Here’s a video for “Pilot” one of my favorite songs from their last album, the magnificent “Neongolden”

By the way, Martin Gretschmann aka Console did a remix for Radiopilot‘s current single “Monster” (my brother manages that band).