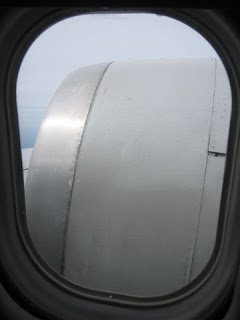 View out my window on DC9

Yesterday I returned from several days in Michigan and Ohio where I did more filming for the documentary Five Sisters.

It was a busy and extremely productive visit. Busy enough to not get around to writing any blog updates. For once I also traveled to a shoot without my friend the laptop (yes, there was some separation pain) since I was already weighed down with four bags including the camera bag and tripod bag.

One of the reasons for this trip was to get footage of the house of the last sister I had yet to visit: Thelma in Pandora, Ohio. I also got to sit down and conduct interviews or film group-conversations with two sisters (Thelma & Beth) and several children and grandchildren. To top it off I caught plenty of verite footage with the sisters, their children & spouses and a bunch of energetic grandchildren. And I mean energetic. Thank you all for participating!

Flying on a DC9 and sitting RIGHT NEXT to the jet engine.

Thelma, her husband Al and their daughter Esther (visiting from Thailand) picked me up at the Detroit airport and took me to son John and his wife Lara’s house in Ann Arbor. Besides enjoying a wonderful dinner (including authentic sticky rice courtesy of Esther) I recorded some fun footage with the grandchildren including a violin concert by 5-year-old Sofia. Taped a great interview/conversation with Thelma, Al, John and Lara about the subject at hand: Five Sisters & aging.

Around 10pm some of us drive over to youngest sister Beth’s son Rick’s house in Ypsilanti. Beth is currently visiting during the same time as me to be part of the filming and to celebrate her grandson Matthew’s high school graduation. We arrive during his party – but spent most of the evening sitting together with sisters and their children talking (and then it hit me: I finally officially crossed the line where at a graduation party I’m hanging with the parents, not the kids).

After everyone has gone to bed Beth and I (foolishly?) stay up until 4:15am just chatting away.

We are up in time for a fantastic family breakfast. But later will pay the price for staying up too late.

Thelma and Al pick Beth and me up at Rick’s and drive us the 2 1/2 hours to Pandora, Ohio – to their house. I am so thrilled that I made the trip: their house is totally different from all the other sisters’. All the homes have tell so much more about the sisters’ character and lifestyle. I just love the Americana feel of that old wooden house among the vast fields. I get some footage of the house and then tons of conversation between Thelma and Beth. Al and Thelma in front of their house

In the evening Thelma’s daughter Carol and her husband come over. We sit down for more family interview with all of them. We record a lot and I very much appreciate everyone’s openness and honesty when we tackle some serious subjects.

I manage to get up early for a run. One of the lessons I took away from film school; according to then-director Peter Stowell: filmmakers need to have lots of stamina and should be in top shape – so I did learn something ;-). I’ve been encouraged to run in particular by one of the fives sisters: Ann has told stories of how she has run in all these places she’s visited and lived in – including through Paris. I think that’s very cool and now wonder if she’s ever run through Pandora, Ohio… Hah!

After filming all over the inside of the house (I always think of all the character-revealing b-roll in Brother’s Keeper) Beth and Thelma sit down for a planned interview/conversation during which Thelma finally gets to record her “my name is Thelma” which had been missing from the trailer.

We just barely cover everything I wanted to talk about and we take off to meet Thelma’s daughter Carol for lunch in her log cabin. What a house! 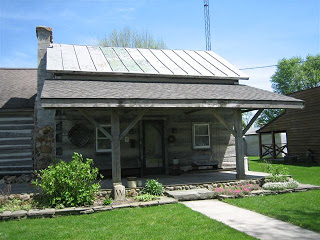 No rest for the weary. Thelma and Al drive Beth and me back to Ypsilanti, Michigan. I’m actually “off the clock” for a little bit while visiting with the family and driving around town.

Another great dinner at Rick and Cheryl’s and then three of Beth’s grandchildren (Matthew, Alex and Ann Marie) bring on the entertainment in front of the camera including several musical performances. It’s good to laugh when there’s been so much serious talk during filming lately.

We round out the evening with another enlightening and moving family interview with Beth, Rick and Cheryl.

Just the last little bits of filming: a few shots of the house and the add-on, which includes Beth and Bill’s apartment for when they’re in Michigan and something for the transition video. Oh, and I get some of Beth’s wonderful sugar-cinnamon toast, the way her dad used to make it when she was a little girl over 60 years ago.

And then it’s already off to the airport again. By noon I’m sitting on a flight to LaGuardia. Fortunately this time I’m not sitting next to the engine (Airbus, yay) but have a row of three seats to myself.

I do end up with an annoying cab driver who because of stop-and-go traffic on the BQE insists to take the mid-town tunnel and drive me through Manhattan on 3rd Avenue!

All in all a fantastic and very successful trip. It’s so great to meet all these interesting people and enjoy their hospitality and willingness to share their thoughts and feelings on camera. THANK YOU ALL SO MUCH!

I think that the group interviews and conversations I’ve focused on since December (instead of one-on-one interviews) are really adding to the dynamic and the tone of the film.

I’m also very pleased that I’ve expanded the scope of the film to include the sisters’ children (and grandchildren) – although I don’t know if there will even be room for it in the end. At this point I have 77 hours of footage!

There are some theories that this might have been the last filming until I have at least a rough cut together. But then today one of the five sisters (Carolyn) and her daughter arrived for a visit in Brooklyn. We’ll see if I can get them in front of the camera…